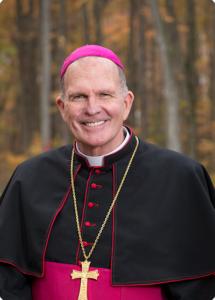 A Message from our Bishop:

In the Book of the Prophet Isaiah, the prophet is speaking in chapter 43 to “Israel in exile,” the “Babylonian Captivity” as this period is called. He attempts to re-focus the Israelites’ attention from their past life to something new, something better, a way of life that promises deliverance and hope. “Fear not,” Isaiah quotes the Lord, “for I have redeemed you; I have called you by name: you are mine (Isaiah 43:1).”
In 2019, the Diocese of Trenton, through the work of our Director of Vocations Father Jason Parzynski and his vocation team, initiated the parishbased program successfully conducted in various dioceses throughout the country adapted from Isaiah’s words to the People of Israel: “Called By Name.”

This effort to recruit qualified young men to the priesthood in our Diocese coincides with the United States Conference of Catholic Bishops’ annual National Catholic Vocations Awareness Week, November 7-13, a time set aside to foster vocations in communities of faith. While the Diocese also encourages young women to consider vocations to consecrated religious life through various religious orders during this week, the principal object and goal of “Called By Name” is for parishes in the four counties to identify young men from among their members who might possibly be called to the priesthood here.

Writing to the pastors and priests of our Diocese, Father Parzynski, quoting Pope St. John Paul II, observed that “in the Year of the Eucharist, we are reminded that without priests there is no Eucharist and without the Eucharist there is no Church.” Each parish has been provided with a “Called By Name” kit to use on the weekends of November 6-7 and November 13-14 to begin and end National Vocation Awareness Week. In addition to publications in parish bulletins and announcements from the pulpit, parishioners as well as parish clergy and religious leaders, catechists and youth ministers are invited and encouraged to use “pew cards” to prayerfully identify and recommend potential candidates “by name” whom they think might have a priestly vocation. The diocesan vocation team will then follow up directly with those individuals recommended.

Other dioceses throughout the country who have engaged in the “Called By Name Program” have reported great success with this program of outreach. During my service as President of The Catholic University of America, I frequently asked young men if they had ever thought about becoming priests. It was not uncommon to hear them respond, “No one ever asked me.”

In Mark’s Gospel, looking at the crowds who were like “sheep without a shepherd,” and in Luke’s Gospel as well, Jesus told his disciples “The harvest is abundant but the laborers are few; so ask the master of the harvest to send out laborers for his harvest (Mark 9:38; Luke 10:2).” Now more than ever, we need to heed his message.